Books at Fictionaut: Together We Can Bury It 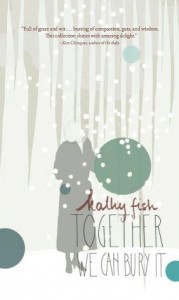 Kathy Fish’s Together We Can Bury It has accompanied me around the world. I’ve read the book on six planes and even in one of those wooden long boats in Thailand while my friends went snorkeling. No, the book is not Infinite-Jest long, but it’s also not a book you can read quickly then retire to a shelf. It accompanies you.

And it challenges. It challenges me to rethink short fiction and to redefine the concept of “flash,” which started as a gimmick-laden, decidedly non-literary form but which has grown up into something very different. Into “sudden” fiction? A form that often feels as if it were written, and should be read, in one breath. A form that is too short for empty words. A form that relies on imagery as much as poetry does. Or even as much as the visual, sensual arts themselves?

Fish is a keen observer but also a remarkable interpreter of her scene, which is always fitted with unexpected details that create such compelling, true-ringing reality. Here is the beginning of “Empty,” a story full of detail:

It rains all over them. Their hair and their clothes droop. Their bare feet slap the pavement. Droplets cling to their noses. They don’t duck and run. These kids. Even their underwear is soaked. The place reeks of manure and corn dogs and Tom Thumb donuts, wet belly buttons and Tiger Boy and diesel fuel and cows and beer. The one boy’s hunched over, trying to light a cigarette, and the other says, Man, that’s the saddest thing I’ve ever seen. And the exchange student says, Ya! The other boy lugs a large stuffed Homer Simpson whose yellow bleeds into his shoulder. Look at us, the girl says, we’re so unkempt and sorry. We need mothering.

I am in love with the image of the water-logged Homer Simpson rubbing off on the kid’s shoulder. And the smell of wet belly buttons. And the girl noticing how a mother might be needed here. Relationships are certainly at the heart of these character-driven stories. All the usual suspects make an appearance: the siblings, the neighbors, the mothers and daughters, the lovers. We’ve seen all of these characters before, but Fish defamiliarizes and translates them anew for us using fresh, evocative yet simple language.

In its elegant simplicity Together We Can Bury It is like a filet mignon cooked to perfection: it looks so easy, but it’s much harder to get the technique right than one would ever think.

If I were teaching a course in the form of very short fiction (not all of these stories are very short), I would certainly put Kathy Fish’s collection on my syllabus. In fact, I might just teach a course because I’ve read her collection. In sudden fiction, the writer/reader has no space for meandering or groping through the narrative for a story. Each move must stick, and in Fish’s stories every move does. Each beginning draws the reader in, and every ending satisfies. The middle is bursting with realism that does not seem constructed to be realism; it feels real and, yes, meaty.

But what makes Fish’s prose so, for lack of a better word, real? I’ve asked myself this question so many times–on planes, on boats and in this very uncomfortable chair right now–and have come to the conclusion that the profound beauty of Fish’s prose starts and ends with the lovingly observed character. And when I try to think of an example of what I mean by “lovingly observed,” I always come back to “Maidenhead to Oxford” about a woman observing a man on a train platform:

The tall man stands with his long arms hanging straight down as if they’re paralyzed. He is soaked through now, his brown and gray hair flat to his skull, his face like his sweater, drooping. I want to go to him, pull him under the shelter like one would do to a small child.

I decide to call him Ralph.

I realize I’ve chosen to cite two stories in which the characters are soaked to the bone. It’s not always raining in these stories, but there is always the observer and the observed, which we can add to that list of relationships in Kathy Fish’s fiction.

Together We Can Bury It spans almost ten years of storytelling. It was released as a limited print edition for AWP 2012 and is being re-released in time for AWP 2013. The collection continues to attract well-deserved attention and praise. Read other reviews.

Christopher Allen is the author of Conversations with S. Teri O’Type (a Satire). In addition to writing book reviews for Books at Fictionaut, Allen is an editor at Metazen and an English teacher in Germany.His fiction and creative non-fiction have appeared widely both online and in print. Allen blogs about his slight travel tic at I Must Be Off!