We are pleased to welcome Amber Sparks to Writers on Craft this month. Amber Sparks is the author of the short story collection The Unfinished World and Other Stories, which has received praise from The New York Times, The Washington Post, and the Paris Review, among others. She is also the author of a previous short story collection, May We Shed These Human Bodies, as well as the co-author of a hybrid novella with Robert Kloss and illustrator Matt Kish, titled The Desert Places. She’s written numerous short stories and essays which have been featured in various publications and across the web – find them here at ambernoellesparks.com, and say hi on Twitter @ambernoelle. She lives in Washington, DC with her husband, infant daughter, and two cats. 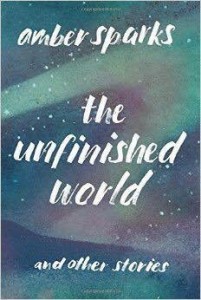 What do you read when you despair at the state of either your work or a particularly difficult manuscript in progress—any “go to” texts?

Yes! Always poetry. It’s the language itself that prompts inspiration for me – it has to start with the language. So poets who do mouthfuls – Sylvia Plath, Aase Berg, Wallace Stevens – that’s my go to for getting out of getting stuck.

I never have the urge to write a novel, ha! Whereas, the urge to write the short story, all the time. The ambition, the sense of challenge, to write a novel, that’s maybe the thing that drives that particular choice. But I will always think of myself as a short story writer. I imagine any successful novel will really be a series of short stories in some sense because of that. It’s where I live in my head, and the unit of time I seem to dream in.

If you could give just one piece of advice to emerging authors, what would it be?

Write when you can and don’t worry about some ideal conditions. It doesn’t have to be everyday – but seize the moment and don’t worry about being romantic about it. I spent too many years listening to old asshole writers talk about getting up every morning and going to the typewriters and drinking one cup of such-and-such kind of coffee and sharpening three pencils and smelling the sea breeze through the open window and so forth. Now I write on my phone most of the time, as unromantic as that is, because I’m on the metro and time is short and ideas are always coming.

There is a sense of seekers and dreamers and a long line of history visible in your work. Are you or were you first a history buff?

YES. I’ve been an avid history buff since I was very small – I think since I first read a bunch of Choose Your Own Adventure books and was enraptured by things past. So that informs much or most of my work. Oddly, the future is the other major time period – I’m rarely writing about the present, it seems.

What influence does the fairy tale hold in terms of how you tell tales?

All of it? I grew up on fairy tales, and their structure, their dark underbellies, their firm rules and the way they can be broken – the casual magic woven throughout – that’s all a big part of what I write and who I am as a writer. Besides, I think we all write with a fairy tale influence – how can we not, when these tales were some of the first and oldest ever told? Clearly the form and subject matter still resonates and rings true.

So many times as I read pieces from The Unfinished World, I was struck by the thought that the surreal nature of the pieces had an enchantment with both the natural world and the idea of being (or being struck from the record), deliberate reconstruction of elements of society for social and gender commentary. In the piece “Take Your Daughter to the Slaughter,” there is something magnificent going on, a sort of coming of age story that harks to a customary phallocentric ceremony, only in this piece the daughters of a town follow tradition and kill werewolves (wolves that will never only be wolves) and eat their hearts in order to continue a “good and righteous way to live.” Each sentence carries loaded weight in that it causes a reader to reconceive the notion of hunting as a male tradition by bringing women to the scene as the predators. The piece also feels informed by the controversy over killing actual wolves in some parts of the country. What inspired it?

I feel like I could read and reread that piece for hours, always coming away with a different thought.

I just love that you picked up on the phallocentric nature of this piece. Not many reviewers have spotted that! It’s probably the most militantly feminist piece in the whole book, and there’s a lot of feminist stuff in there. That was a part of it – the relationship between fathers and daughters, and the idea of women as hunters, as predators, the turning of the traditional tables. But there was also the simpler idea that it started with, which was my conflicted opinions over hunting. I’m against it, pretty strongly, but I’ve certainly spoken to friends and family (I’m from a part of the Midwest where hunting is a big tradition in families, though not mine) who considered it something much more honorable than what I see it as. Nearly all of them spoke of family when they spoke of hunting, which I thought was interesting. And when I’m conflicted or want to think through something, I write about it, of course.

In terms of craft, there is an aspect of your style that I enjoy, which involves a sort of cataloguing, a listing, sometimes by chronological order and other times by objects. I see this in several pieces and it’s fascinating. What early texts may have impacted this part of your style of telling, or was it more organic how this came to be?

You know, I’m not entirely sure. I’d guess that a lot of it had to do with having been a poet before being a short story writer – poetry is much more often arranged in listings or by object. I’ve also always been drawn toward unusual forms in storytelling – I love writing within constraints, and find it frees my writing in so many other ways. There’s always a sense of play I find to be the most fun thing about writing, and experimenting with form and order is one big way I keep that intact.

The title story “The Unfinished World” is the longest piece in the book, but it is neither first nor last. Can you speak to how you decided to order the stories in the collection or whether that aspect was under publisher’s control?

Sure! It was the editor and I together who made those choices about order – and there’s a flow there that I can’t explain but felt sustained a kind of dream throughout, a floating world. I knew I wanted to end with “The Sleepers” because to me it felt like the closing of the dream, the winding down that the book deserved.

How long did it take to put this collection together and over how many years was it written?

It took about six months to put together, maybe a little more – and about three years to write. Almost everything was written after my second collection came out in 2012, though a few of the pieces are older than that – though they were revised for the new collection quite a bit.

Two things that make this collection so special for me are the way you don’t shy away from a Shirley Jackson sort of horror to be found in the pieces, subtle and literary horror—and the way wars and politics are interposed with fairy tale or beatific imagery. In the piece “Things You Should Know About Cassandra Dee,” I found everything from a contemplation of the cost of beauty to the necessary discussion of the dangers that taking something for nothing create.   What role does the tragic scenario play in your imagination?

Thanks! I don’t like the idea of shying away from a necessary violence, especially if I’m going to write about beauty and death – cruelty and violence are their natural bedfellows. I’m always thinking about the worst-case scenario, because I’m a worrier and a neurotic and also a creative type with a morbid sensibility. Or so my parents say.

Elegant rhythms and precise word selection are stunning features of your stories. Do you find your mode of composition has been more influenced by your reading habits or a listening for the musicality of the prose?

I love that you use the word elegant because I really strive for that. I’m a maximalist – retrained maximalist perhaps, but a maximalist all the same. Much like fashion: I admire minimalism in writing and fashion by can’t pull it off in either. I’m far too interested in piling on texture. But at the same time, I do appreciate a certain restraint and effortlessness. I think that comes, again, from poetry, from music, from the kind of storytellers, like Calvino, like Isak Dineson, Kelly Link, that I really appreciate. I also watch a lot of screwball comedies, grew up doing so, and always admired that style, that elegance, that wit. Restraint is often a character, almost, and quite funny, too.

Be kind. Always. Don’t burn any bridges. The world is small and the writing world is tinier still. Be a tireless champion of other people, because that’s the point, the only thing we’re here for, really. And read whenever you can.

What do you imagine to be the role of solitude in an author’s life, good or bad, and how do you feel that impacts women who are writers but also mothers, as we are?

I find solitude for writers rather necessary but also somewhat overrated. I don’t believe you have to observe to discover, but sometimes you need to get out of your own head. Most of my best observations about character have come from observing other people. I enjoy being alone, as I’m sure most writers do, and I need solitude to recharge my batteries, though – and I’m not sure I’ll get too much of it the older my kid gets. (Right? Maybe?) So I’ll have to find pockets of it on my own, I suppose – luckily, my husband is just as hands-on a caregiver as I am and always willing to spot me if I need to write or just get out of the house for a little while and walk.

What’s in the immediate pipeline for your readers next? And what are you working on now? Give us a sneak peek.

Right now, a novel – ha. And more short stories. I don’t want to jinx them by saying much about them, but this will be the fourth novel and it’s much smaller of scope than my last three (failed) novels have been. So maybe this time is the charm? We’ll see.