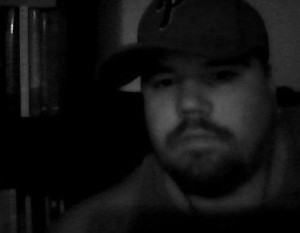 We are pleased to welcome Barry Graham to this month’s installment of Writers on Craft. Barry Graham is a writer, healer, foodie, Tic-Tac-Toe champion, horror enthusiast, and founder of DOGZPLOT. His latest book, American Guerrillas: Manifesto is out now from Underground Books. He is a regular contributor for Revolution John Magazine and a perpetuator of all things conspiratorial.

What do you read when you despair at the state of either your work in general or a particularly difficult manuscript in progress—any “go to” texts?

I wish I had a better answer, but books don’t really help me out when I’m in that type of jam. When I write, I draw from observations and sensory details, things I’ve tasted and touched. I admire writers like Dr. Seuss or Matt Bell, writers who are capable of inventing entire universes. I’m just not that clever. I’m a house of mirrors. If you took any random group of strangers and put them in the same neighborhood, the same social setting, for a year or so, then asked them to write down everything they observed and experienced, you would have very different tales. Because we are all unique. What is unique to me isn’t my language, isn’t my sentence structure, isn’t my vocabulary or the books I’ve read, there’s nothing new under the sun, it’s the way I interpret my observations, the way I experience sensory details, that’s what’s unique to me, and to each of us individually in the exact same way. Then I just arrange my observations and perceptions in a way that forces readers to experience what I’ve experienced. Sometimes I fail, sometimes I succeed, but that’s always my attempt. I wish more writers understood and utilized that weapon.

“Put every word on trial for its life.” – Francine Prose. There isn’t even a close second.

Your work has moved in a more overtly philosophical and political direction of late.  What do you think has caused this?

The way I experience and understand the world.

I wrote for so long before I even thought about publishing my writing. It was never a priority. I had a bunch of bullshit inside that I wanted to let go of. It was a way to remove negative energy from inside and replace it with the positive things in my life, the beautiful energy of my family and friends and my spirituality, so in a way it makes sense that so much of the early fiction I published was thought to be grimy and unpleasant. That’s the energy I had stored up, that’s what needed to be replaced. Writing is very therapeutic in that way. But I guess, over time, like a lot of other folks, I sought validation, I was concerned with getting into this journal or that journal or getting a book deal with this press or that press, and I became unhappy very very quickly with using publication as a motivation or a factor in determining my own failure or success. A jury of your peers will never be a very realistic or healthy thermometer. I had a pretty honest conversation with myself concerning my own motivations and intentions and I came out of it very unconcerned with publication. Sheldon over at Revolution John Magazine was gracious enough to give me an outlet for anything I do feel like sharing via magazine publication, and what I don’t I either throw away or put in a Dropbox file and put it online for anyone to access. That’s the only way I care to publish a book at this point. Call me pretentious or whatever, but I’m an artist. What I attempt through words is to create something that forces people to react physically, whatever that means to anyone individually. That is my only personal standard of judgment. If I fail or succeed it will be on those terms.

What do you feel is the purpose of literature?

The same as bass fishing or eating a really good ham and cheese sandwich.

Nothing you know is real and there’s no remedy.

Embrace the interdependence of all humanity in order to survive as a whole.

Be kind. Always. Even when it hurts. 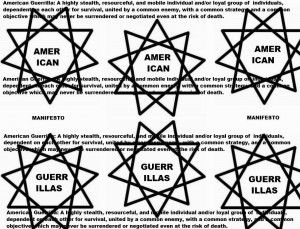 Your new book American Guerrillas: Manifesto radicalizes the concept of what conformity means in America today—while highlighting some larger issues about how the rich stay rich and how American greed has gutted the future of the American middle class and the poor.  Do you imagine anyone could actually follow the manifesto?

All things are possible. We’ll see how it goes.

In one excerpt of the text, American Guerrillas reads, “A true guerrilla remains strong and spreads his prosperity by overcoming ego and pride through constant internal struggle and self-improvement; once he has ensured his own survival, safety, and security, he immediately strives to make the world a better place by stabilizing and uplifting those around him and securing freedom, equality, and justice whenever they see it threatened or repressed.” This kind of idealism/ethics connected to your concept of guerrilla seems often to me to be on parallel with my idea of any individual who embraces activism and good ethics—but stands in contrast with the way this book sets up the powerless American average citizen paradigm regarding any non-1% citizen’s actual ability to stand against corruption, class ownerships by big business, integration of government war efforts with profit sector activities, and the use of penal institutions as additional cheap labor sources for the wealthy. But your book also stresses stealth and anonymity as a good costume to embrace for covert change.  Do you believe that activism via regular channels fails to make change?

One premise that has to be understood about American Guerrillaism is, it’s very Whitmanesque, riddled with daily contradiction, on every practical, ideological, and spiritual level possible. So, really, it depends how you define change. There are certain social issues, that yes, absolutely, working the system will bear fruit. We see this every day. Marriage equality, recreational marijuana, etc, but as far as our place in the corporate oligarchy, the reduction of our civil rights and liberties, the slow and steady decline until we collapse, no, absolutely not. We are along for the ride. With that said, it doesn’t mean we should ever stop trying. It doesn’t mean there isn’t a way just because I don’t know it. It doesn’t mean I’m not wrong. There are forces in this world that have decided, collectively, that they’ve agreed with my observations concerning America’s strength, so they have set in motion very complex plans, involving very complex people, places, and things, that transcend the boundaries of time and place. It’s been happening for centuries. Very very covert. Those people get it.

What is the real purpose of a manifesto? Any manifesto?  I enjoyed reading this one since it touched on so many topics I care about, such as the dwindling power of the poor and middle class to impact their own lives or create paths to power in a world where such people are actually used and thrown away by the rich, increasingly more so as consumables are created as disposable and capitalism causes a buy and toss mentality that both creates pollution and waste, i.e. cheap crap that must be bought and bought again as replacement to keep the capitalistic cycle turning.

I can’t speak for anyone else who has ever written a manifesto, but the purpose of American Guerrillas Manifesto is to get people inspired to take immediate and necessary action to ensure the safety and survival of their loved ones, and to start by redefining their own personal moral compass, to evaluate their priorities, their allegiances, their role in society, and stop serving a master that doesn’t care whether or not you exist.

Is it possible that this book attempts to tie together the many causes of such disempowerment for anyone not pulling the strings—is meant as a wakeup call to the reader as to the complexity of the reasons why “the American Dream” as it once was imagined has lost so much of the good empowerment once thought to be attached?

In a sense. What I’d like for people to understand is that the American Dream doesn’t exist and never has. Even if you think you’re living it, you’re not. It’s a conformity package so everyone plays nice and feeds the machine. You have power. We all do. Lots of it. But the American Dream isn’t it. Find it for yourself.

Your work is philosophical as well as political.  Do you imagine your readers will see more of this type of work in your future publishing timeline?

I have no idea what I’m gonna write minute to minute. Right now I’m working on a series of poem collaborations with Peter Schwartz. I also wanna write a version of Pinocchio.

As an editor, a fiction writer, a father, an activist (clearly! Manifesto!), what are your most important goals in the next five years?

My most important goal is the same it has been since May 23, 1997, to raise my children to be quality human beings. That will never change. I would also like to be ready to go totally off the grid by the time my youngest daughter graduates. Travel, write, take some photos, do some great drugs, have some great sex, eat some great food, fall in love with as many things as possible. The world is gonna do what it does.

What’s in the pipeline for your readers next? And what are you working on now? Give us a sneak peek.

When the square root of a moonbeam directly correlates to the size and shape of a universe you can’t control.  Mama don’t tell tales.  The armor which least protects my vital parts.  Once a flood, twice a reservoir.  Regulated clusters of bad intentions, transparency as a radar, as a symptom of miscommunication.  Footprints serve two purposes.  The collection and transformation of unwanted molecules.  Mass converted to disaster, to the only part of ourselves we understand.  Not philosophers.

A puddle of mush where his face should be.   Ascension takes a lot of collapses.

Writers on Craft is hosted by Heather Fowler, who cares about writing. She does a lot of it. Visit her profile on Fictionaut or see here for more: www.heatherfowler.com.