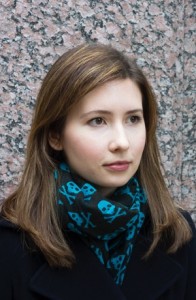 I’m thrilled to be the guest editor for this installment of Editor’s Eye and appreciate the opportunity to take a closer look at some of the great pieces being published on Fictionaut in late November. I tried to choose stories and poems that may have been overlooked, ones with relatively few views or comments, with the hope that more readers may revisit them.

“Becoming” is a perfect example of how the theme of transformation lends itself well to flash fiction; the moment of change can be vivid and visual while still suggesting a rich web of meaning both before and after the event. Tonya’s futuristic take on an Ovidian kind of Metamorphosis — the girl’s visceral transformation into a bird — is unique, a rare accomplishment when it comes to such an age-old story. I think the pacing here is excellent, and Tonya manages to strike a balance between action and dialogue that creates a world far removed from our own yet somehow familiar. What I thought was particularly clever was how the most immediate and convincing part of the story is also the most detached, as we witness the transformation through the eyes of our characters watching a video screen.

“That One Time We Were on NPR…” by Emily Sparkles

A poem, short story, and film script all-in-one. What happens behind the scenes is often more interesting than the perfomance itself. I love how Emily creates tension and drama by what’s not being said, using the silences and omissions to reflect the confusion of a scene based on true events. When we look back on a situation that escalated badly, we often try to attribute meanings and motives, while the reality is often messier and less clearly defined. Emily stays in the moment, and although her Big Chief and band members are anonymous, she captures the kind of brush against authority that anyone can relate to.

They say the devil is in the details and Tabatha’s story certainly proves it. She grabs us with the title, transporting us to a specific moment in Argentina’s Dirty War now buried under the broad strokes of history. Once again, the most powerful part of the piece lies in omission, in what’s not been said. In this case, the boy’s story is ripped apart into a before and after, and the silence in the middle reflects the violence hushed up by the Argentinian government. These ‘disappearances’ could easily slip into obscurity, and yet Tabatha gives us concrete details that are hard to forget.

This story is pure delight, a humorous look into the obsessive mind of a failed novelist that I think all writers can relate to. Con breathes new life into the ever-amusing spectacle of the ambitious parent who takes child rearing a little too far. Part of me roots him on — after all, he knows exactly how to achieve literary superstardom, even if he can’t manage to get there himself. I’ll take the literary coach parent over the sports coach parent any day. As someone who loves both “Gone with the Wind” and Eudora Welty, the struggle between Paige and her father about the merits of “honking big novels” over short stories put a giant grin on my face. And anyone who can write a cracking short story while making fun of the form at the same time is a success in my book.

“The Thing on the Stair” by Wesley Baines

Halloween has come and gone, but Wesley keeps its spirit alive with this short yet spooky poem. I hear echoes of Emily Dickinson in the way the simplest words suddenly become tangled in multiple possible meanings. The ambiguity of “It” really works to build tension and add a chilling tone, as if “It” is coming after us as we make our way down the poem’s ladder. The rhythm reminds me of a wicked nursery rhyme, or something Macbeth’s witches might be murmuring in front of their victims. The “You formed it first” comes as a surprise, a hand grabbing you in the dark, as you begin to wonder if “It” hasn’t already invaded your thoughts.

A romantic comedy gone wrong in the best way possible. The tight structure doesn’t let us come up for air, building tension as our hapless heroes try (and fail) to climb uphill. Nonnie takes the slipping on a banana peel gag (or, in this case, slipping on wet leaves) to a new, more sophisticated level. That “coy toss of the head,” the mainstay of all romantic exchanges, becomes a dangerous weapon in this case, more destructive than the gun our Russian is holding. This piece reminded me of classic screwball comedies, where the characters keep falling on their faces while we keep laughing at their expense. Not knowing the title, I would have guessed this is a spy thriller set in some exotic alpine location. Knowing that it happens in Philadelphia makes it all the more humorous.

Katrina Trepsa lives and writes in New York. She blogs at www.moodsandappetites.com