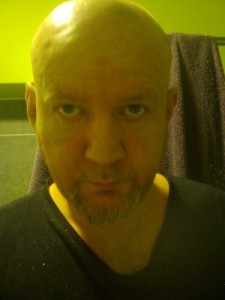 the cult of “etiquette”

or the death of chivalry

or the war against biology

I concern myself with works that speak only for themselves.
http://fictionaut.com/stories/john-olson/hollywood-sugar

Some things seem hidden but are really just lying out there in the open for all to see, but a hell of a lot of people see what they want. This is about humility and how it doesn’t always arise from the righteous or the gentle but from those who can be immensely cruel, certain souls that swim too long in the pool of their own narcissism have to rise to the surface eventually, dry themselves off with a towel, to see in others what they see in themselves and see in themselves what they see in others, its inevitable. Let us engage the composition of pain by its nihilistic distillations and produce huge orchids of understanding, we must court consciousness. Amen to that. Ignorance leads to enlightenment leads to ignorance leads to enlightenment. Its evolution. Evolution as a circle.

Hints of Dickinson and Rosetti. Reminds me that sometimes it is better to take the more difficult way out, something that is rare these days. Inverted cliche, you’d assume she’d take the lifeboat, anyone would, right? Going your own way is often the best way even though you know it won’t be easy. It doesn’t say anything overly profound but this piece tells us that anyone can overlook the familiar and neglect the element of mystery it still contains/sustains. What the eye doesn’t see is more important than what it does see. Not all the dots are supposed to be connected. Life is not a workshop. Sometimes that lifeboat is the carrier of your own demise.

And hell, at least it isn’t pretentious.

Sometimes going from a place you know to a place you don’t is simply the expression of the defense mechanism, that primordial reflex, a process of moving within ourselves, that constant state of internal transit. Not to flee from a cobra or a tiger or a stampeding elephant would be madness, but what are we fleeing to? To know that too is equally important. To move is good as long as it’s with a degree of caution, sometimes the removal van tips over and destroys some of the furniture. Keep in mind, you might lose some of your favorite possessions.

John Cassavetes once said “the journey is the destination” and I feel he is probably right. I keep wondering when the aliens will reveal themselves openly. I met one on a bus once, he told me it was stupid we were still being kept in the dark. I want to see the inside of that starship but I’m not quite sure I could pass myself as a revolutionary. The correlation of the flash of the camera with the glare of the sun is a damn good one. I identify. I’m photosensitive.

The sun is always different, to every eye.

Domesticity reaches out, motions precariously to the ether.

I can be a sucker for sentimentality but this poem isn’t sentimental.

I also hear The Bangles. The sound of the voice can be more meaningful than the words it emanates. What is it about Monday that inspires? After all, time is supposed to be an illusion, isn’t it? How many of us remember what happened last week? Ideas are better sometimes for collecting than putting to any obvious use, ask the ghost of Whitman, ask Anthony Bourdain. Sometimes you’re better off just beckoning rain, drinking champagne.

This is a mood piece. I’m not saying it isn’t about anything, just that it isn’t about anything tangible, it doesn’t flirt with absolutes. It speaks Memory. How memory can seem like an entity in itself. The last line could be cliche but is rescued, because it is the speaker remembering in the dead of the night what he never took notice of during the daytime.

How can I comment on this one? It’s hard. Anything anyone could say about it would pale in comparison to what the piece says itself. It says that without suffering we would suffer, addresses darkness in a luminous way without expressing any need to destroy it, paints brutality with a weird elegance, makes tragedy edible. Don’t quote me on that, I could be wrong.

I haven’t read any prose in a long time. This makes me want to reread Balzac and Zola with a bout of Kafka in between. This isn’t Cultural Marxism. This isn’t Feminism. This isn’t Gender. It’s the willingness to know frailty. The need to embrace despair. Just read it.

Samuel Derrick Rosen was born in Glasgow, Scotland. He enjoys sub-meaningful sojourns in the park, lazing outside his local cafe sipping Italian coffee mixed with Chinese green tea, playing the odd games of Chess and Croquet and looking into his dog Trixie’s eyes. He has had his works presented in several publications, Omphalos 12, The Banana Peel, Shorelines, Wire Mothers, The Cataclysmic Rose, The Four of Cups, Interdimensional, The Stranded Jellyfish, Second Tide, Fathers and Daughters, The Queen of Hearts, Lost Children, Tracks In The Sand, Slippery Science, Gutter 10, and many others.

He believes any form of completeness is ultimately deceptive.