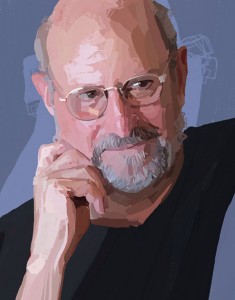 Faithfully reading Fictionaut’s new postings every day, I kept a list of stories and poems that struck a chord with me. Most of my choices won a place on the Recommend Stories list. The purpose of the Editor’s Eye is to find unheralded gems. I changed tactics and decided to select stories that involved lists, litanies and catalogs.

The tradition of lists is as old as Homer. Lists are flexible and have great appeal to writers, compressing quantities of information in a small space. Graphically, lists can be straightforward, take the form of a litany, or be embedded in the text. Lists can also be mnemonics, establishing place, timeline, mood and character. Lists, for example, dominate Georges Perec’s masterpiece La Vie mode d’emploi. They are key to that novel’s structure and narrative.

Most of my choices found their way to the Recommended list, but they serve as examples of different ways authors use and incorporate lists.

To See Who’s There

According to the author, this poem is an ABC poem, i.e. one where each stanza begins with the next letter of the alphabet. That plan was not strictly followed, but that is not what gives this labyrinth of history, genealogy, factoids, gems and catechisms its punch. Its narrative spans many generations of the author’s extended family.

I enjoyed “at home looking after the children” which brings attention to itself and slows the tempo.

Or this Joycean “R” line:

Try reading that aloud at a good clip. Tricky.

In many ways this poem reminds me of Evan S. Connell, Jr’s Notes from a Bottle Found on the Beach at Carmel. In addition to lists there are jarring historical facts: to wit: “My Scots switched sides, switched back. Lost their land, kept  their heads.”  This narrative poem is an entertaining read and a good example of the power of lists.

Klarheit-oder-genug (literally: clarity or enough) is a short prose piece that achieves good effect from the list as litany. The narrative begins as a search for FBI records relative to a fingerprinting episode at the offices of Girls Write Now, and then the story journeys to an aside about data collection and personal brushes with the law. Ann uses commonality as a hinge to change locale or direction. Using a police stop as a hinge, we discover this wonderful litany of a character’s personal facts:

“Davy was nearly blind. He did drive. He collected S.S.I. and perhaps Medicaid that didn’t cover insulin, necessitating that his grandmother’s sister, Esther, pay for it out of her own pocket, among other expenses pledged to be repaid by an elderly hearings court in Houston, who had appointed a guardian ad litem for Esther’s sister, Helen, to care for Helen’s estate.”

One could parse this as:

All of the character’s essentials are laid out in two short sentences and one long one. The staccato of the first two sentences followed by the long exhale of the third has an anapestic quality. This last sentence contains a host of interconnected information that is perhaps more genug than Klarheit, but the writing keeps the reader on track.

Ann fluidly moves through time, place and circumstance. Her narrative skillfully guides the reader from non-fiction narrative, speculation and commentary. This piece reminds one of Kerouac, or of Mailer’s power writing. There is a stream of consciousness quality to the writing that makes the piece more powerful than a common list. There’s always a special quality to Ann’s writing. For her less is more. And the spare-and-sparse surface of her work belies the internal complexities.

Would You Ask A Librarian For A Lap Dance?

Roz Warren is a gifted humorist and a professional librarian. This entire story is itself a list. Roz entertains the reader by a litany of the most outlandish questions and requests she and other librarians have received, including the title request:

The requests range from the sexual, the demeaning, and the illegal to the astonishing:

“A divorced dad came to Story Hour, asked me out, then asked me to marry him!! I did!”

Roz’s writing is always a treat and like most humor it has a serious point. The library is an open public space inviting a steady flux of humanity. Its stewards must be prepared for anything.

Connaught: down at the heels castle

Here is a distinctive piece, a poem inspired by an ancient Irish castle; and it is contrived and crafted entirely as a list. And what a list of images it is. The poem is short, I’ll post it all:

Lovers fumble in the thick undergrowth.

An Episcopal priest drowned in the moat back in the 1950s.

The local football team plays in burgundy jerseys with a yellow stripe.

A sextant once owned by Magellan is buried in the wine cellar.

Loons swim in the nearby lake as the dying sun spasms.”

This list compresses time from the Norman Conquest to the present day. The poem’s action is hidden really: Claffey quietly gestures to the remains of a forgotten history. The author’s choices delight as they inform.

This melancholy story is on the death of children. I suspect it is an allegory for a children’s orphanage or foster home. The setting is a cemetery, or rather the ground under the cemetery where the children leave their coffins and interact with each other.

Here is a paragraph that lists some of the residents of this gloomy underworld, ironically identified as Meadowlark Children’s Cemetery:

“Another kid, Brian Cleary, was accidentally shot by his step-dad when they were hunting. Margie Forsythe, smoke inhalation when her house burned down. Gregory Mountain, drowned in Forrester Lake trying to save his sister’s inner-tube, while she watched from the shore. And on and on.”

Like any society, Kemmick’s world has its share of squabbles, treacheries and a mob that destroys the coffin of the first child to be taken away by an angel. This event is followed by this paragraph embracing features of the list-catalog and a universal existential sigh:

“The conjecturing went on for some time, back and forth, back and forth, all of us transformed into a philosopher, a theologian, an investigator of impossible truths, but all the while, none of us said what it was we were all really thinking, that we wanted the angel to come back, that we wanted to be next, to hold his hand, or cling to his wings, to be led off, or up, or in whatever direction Heaven might lie.”

Our Graves is a story that stays with you. It is long (4830 words) for Fictionaut, but well worth the read.

I include this highly recommended flash fiction because its closing line is stellar:

“And love circulates in my blood slowly creating antibodies of doubt and fear as if they always exist together.

One for the time capsule.

The blues genre is a sack of woes, to paraphrase the great jazz saxophonist, Julian “Cannonball” Adderly. The blues gets down to a recounting of all that is wrong, gone wrong and been wrong. Tim Young’s Blues Repeat is not in the form of traditional blues, but it surely lists many things that can make one blue.

Two verses that stand out:

“Don’t look at me honey

I fell on the table

my hair is on fire

my heart is unstable”

I spit when I cough

it’s time to lay off”

At times the rhymes are forced and detract from the startling images. Some judicious editing could make this a commanding blues lyric.

Daniel Harris was born in Chicago in 1943 and educated at the Eastman School of Music and Yale University.  He worked for fifty years as a professional classical, jazz and studio musician. He is also a painter (some 3000 works and counting), ceramist, inventor, and author of short stories, non-fiction and opera libretti. He serialized his first novel, Five Million Yen, on Fictionaut. A selection of other stories and flash-fictions are posted on Fictionaut. His previous creative non-fiction works are: The Butterfly Effect, published in Mad Hatter Review #13 (2013 Million Writers’ Award) and The Audition, published in Eclectica. He illustrated Ann Bogle’s Country Without A Name published online by Argotist. As an artist he works in traditional media and also creates works on digital mobile devices (iPhone, iPad, iPod). He is the composer of over fifty musical compositions in a variety of styles and media. He has won numerous awards for music composition, musical engineering and audio engineering. He is a respected authority of underwater musical acoustics. His personal website documents his musical career.