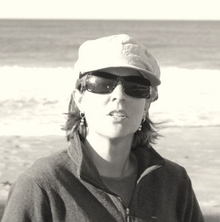 Susan Tepper: Stories written from the POV of the opposite gender fascinate me, and “French Kiss” is a beaut.  You wrote the male POV really well here in first person.  Did you have an inkling of your guy narrator before you began the story?  And what does he look like?

Michelle Elvy: I did not know what kind of person he would be at first. The woman was much more clearly outlined in my head. But when I started writing, it all became obvious: he had to be somewhat reserved but definitely game. And more than a little taken aback. I knew I wanted to play with stereotypes- what he expected of her, being French, and what she does to surprise him and confound him. The fun part of writing this piece was that I can relate to both characters in some ways. We are all at times reserved, at times flamboyant. I like to push those things in my writing and in my own life. And I like testing my own limits in terms of the testosterone/estrogen balance, on paper and in life.

As for what he looks like? Dunno. Never thought of that. Except that he’s gangly. Bony knees.

Susan: Ah ha!  So that’s why his knees were jammed into the dashboard!  I like your idea of testing the levels of testosterone/estrogen via characters and real life.  To be able to pull that off lends great strength for story telling.  So your guy is a middle aged Biology prof having his big mid-life crisis?  Or some such thing?  A married man?

Michelle: Naw — I did not judge him so directly, not at all. I thought of him neither as middle aged nor suffering from a mid-life crisis. More that he’s a routine kind of guy, regardless of his age (I reckon he’s mid-to late-30s; that ain’t middle age yet, now is it?) and this breaks his routine in a big way. And most important of all: he likes breaking the routine, even if he did not expect it of himself.

Susan: No question that he likes this break in his routine.  You start off by saying he wants sushi and she likes hamburgers so he gives in and they have burgers.  Routine-wise, what is he breaking exactly?

Michelle: He’s a nerdy academic kind of guy (don’t get me wrong, they can be hot).  But he’s a routine kind of guy in his work, in his expectations. He’s got some kind of idea of what a French woman would want, so he goes out of his way to make the date just right: thinks wine and sushi will do the trick and impress her. He wants it to go well, so he’s planned it, you see.  She drips that mayo and it’s gross to him; she is not quite as refined as he expected. She’s not what he expected at all, in fact.

Susan: Do you think your character does this type of sexual adventure in the car frequently, or is this a one-shot (no pun intended) deal?

Michelle: Hmmm. Hard question. This story, while about these two particular people, is more about experimentation than anything else. It’s less about them as individuals than about this moment in which they find themselves together, and how they respond to each other. So I don’t know what he or she does outside the boundaries of this particular story- nor do I think it’s important. For me, finding a way for these two people to meet (however hapless he might be) was the essence of the story. I do not know the color of his socks or which side of the bed he sleeps on. I do not know if he’s a Pisces or a Virgo. I do not know if he calls his mother regularly. I do not know if he likes green eggs and ham.

But back to your question: I do not think he’s a serial car-sex-nerd, no. But perhaps I’ll have to consider that sort of character for another story.

Susan: Is he the type of guy who might eventually fall in love?  Or is he a “serial dater?”  I’ve known some serial daters who died as single men, after thousands of conquests, and that’s sort of scary to me- in the sense of a life led unable to truly connect with loving another person.   A lot of those types love their dogs unconditionally.

Michelle: You find him much scarier than I do, Susan. I think he’s charming, actually (he’s a Waits fan!). He does not enter the date with an agenda other than wanting it to go well, whatever that means. And no: he is not a serial dater.

As for love? Of course he might fall in love- I’m a romantic at heart.  He might even fall in love with her, so long as he can stomach a lifetime of mayo and Jaegermeister.  Grinning and grinding happily ever after. Every story should end so well.

Susan: Right!  And, yes, I do find him scary.  But it’s a sign of strong story-telling that you bonded with your narrator.  Reading this, what made the story such a wild romp was that I saw him getting exactly what he wanted.  A girl who eats mayo sloppily then screws his brains out.  Your guy, in my opinion, is the unreliable narrator to the hilt.  And that is such a kick because those characters keep everything delightfully off balance.

He says: “She scared the hell out of me, from her rock-hard nipples to her abundant thighs to her curious tongue.”

I didn’t believe he was scared of her.  And that he does this sort of thing a lot, maybe.   Sexual jaunts in a parked car.  I was thinking: well he’s a biology professor, can’t he afford a cheap motel room?  This tall nerdy guy with this young French hottie squeezed into the front seat of a car.  Not exactly your traditional dating milieu.

Michelle: Yes, but remember: this story is about the meeting, the coming together. It’s not about him or her, really, but about this particular moment. A cheap hotel room would not be his style, nor hers. This is all about spontaneity, not one agenda winning over another. In the end, the very idea of spontaneity wins. But I do think it’s interesting that each reader can take away such different things from a 250-word story.

Susan: Yep, that’s the beauty in it all.

Monday Chat is a bi-weekly series in which Susan Tepper has a conversation with a Fictionaut writer about one of his or her stories. Susan is Assistant Editor of Istanbul Literary Review and hosts FIZZ, a reading series at KGB Bar.